Appearance and biology of the Asian hornet 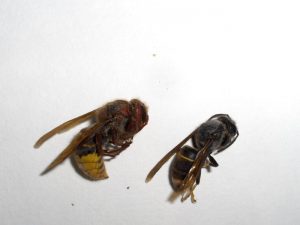 The Asian hornet is smaller than our native hornet, with adult workers measuring from 25mm in length and queens measuring 30mm. It’s abdomen is mostly black except for it’s fourth abdominal segment which is a yellow band located towards the rear. It has characteristical yellow legs which accounts for why it is often called the yellow legged hornet and it’s face is orange with two brownish red compound eyes. 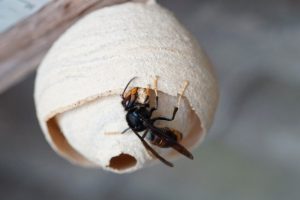 Spring
After hibernation in spring, the queen, usually measuring up to 3 cm, will emerge and seek out an appropriate sugary food source in order to build up energry to commence building a small embryonic nest. During construction of the nest, she is alone and vulnerable but she will rapidly begin laying eggs to produce the future workforce. As the colony and nest size increases, a larger nest is either established around the embryonic nest or they relocate and build elsewhere. 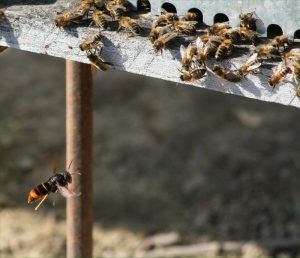 Summer
During the summer, a single colony, on average, produces 6000 individuals in one season. From July onwards, Asian hornet predation on honeybee colonies will begin and increase until the end of November and hornets can be seen hovering outside a hive entrance, waiting for returning foragers. This is the characteristic “hawking” behaviour. When they catch a returning bee, they will take it away and feed off of the protein rich thorax; the brood requires animal proteins which are transformed into flesh pellets and then offered to the larvae. 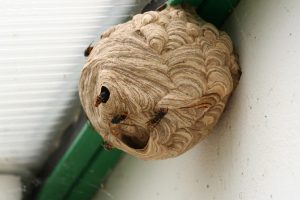 Autumn
During autumn, the nest’s priorities shift from foraging and nest expansion to producing on average 350 potential gynes (queens) and male hornets for mating, however, of these potential queens, only a small amount will successfully mate and make it through winter. After the mating period, the newly fertilised queens will leave the nest and find somewhere suitable to over-winter, while the old queen will die, leaving the nest to dwindle and die off. The following spring, the founding queen will begin building her new colony and the process begins again.

In light of the Asian hornet finding in the UK in September 2016, it is imperative that you make sure you know how to recognise and can distinguish them from our native hornet, Vespa crabro – a very helpful ID sheet and poster is available to help you:
ID sheet