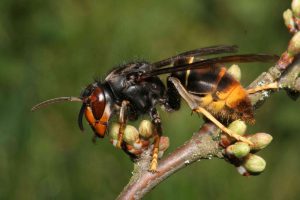 Asian hornet
Vespa velutina, the yellow legged hornet, commonly known as the Asian hornet, is native to Asia and was confirmed for the first time in Lot-et-Garonne in the South West of France in 2004. It was thought to have been imported in a consignment of pottery from China and it quickly established and spread to many regions of France. The hornet preys on honeybees, Apis mellifera and disrupts the ecological role which it provides and damages commercial beekeeping activities. It has also altered the biodiversity in regions of France where it is present and can be a health risk to those who have allergies to hornet or wasp stings. 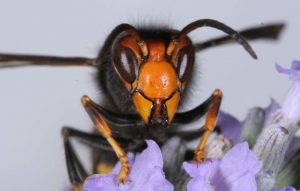 In 2016, the Asian hornet was discovered in the UK for the first time, in Tetbury. After 10 days of intensive searching, the nest was found and later destroyed and on the same day, a single hornet was discovered in a bait trap in North Somerset. Genetic analysis has confirmed that the hornet nest found in Tetbury and the dead hornet found in North Somerset were of the same genetic population (Vespa velutina nigrithorax) as those which came from Eastern China to France. Although we cannot rule out the hornet arriving directly from the same area in China, we believe this is highly unlikely.